Ever doubt the power of incentive compensation as a motivational tool?

"Pay for Performance" and the extensive use of incentive programs is a hallmark of a key strategic process many companies embrace as a means of keeping pace in today's ultra competitive marketplace, but what happens when that process goes astray? Football coach Greg Williams is under investigation for architecting a 'Pay for Performance' corporate incentive program which rewarded players for plays that resulted in a physical injury to opposing players. The program is suspected of ending of Kurt Warner's career and dramatically endangering the future of Peyton Manning's career amongst the countless other 'lesser stars' who were injured and carted off the field of play.

But alas, this program had all the hallmarks of a well designed incentive compensation program;

Was an incentive bonus program gone bad (a.k.a. "Bounties") the reason for Peyton Mannings neck injury ? 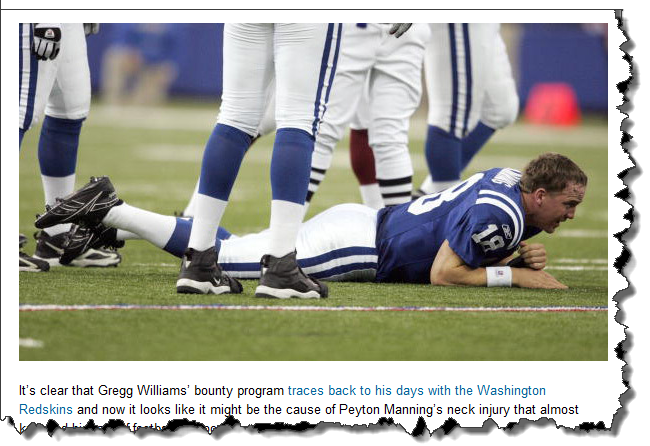 There is no doubt that incentive compensation is about nothing if not goal alignment and reinforcing behavior that is aligned with strategic goals. The discussion on this type of ‘Pay for Performance’ program should get interesting as lines of responsibility will undoubtedly cross with the political and economic interests of the league. In the military, the solution to similar situations (Read: Kitty Hawk sex scandal) always starts with career altering judgments involving Admirals and Generals; it will be interesting to see how extensive the practice of Rouge Pay-for-Performance programs is throughout a league that markets violence as an important element of the product and where the 'buck really stops' when these programs stray from the strategic goals of the league. Stay tuned …